Camden Robert's Award-Winning National Essay on "What Is Needed to Fix the Electoral College?" 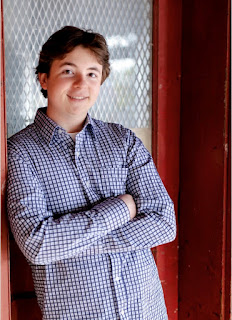 Camden Roberts, a young nineteen-year-old scholar, and resident of Enid, Oklahoma, won a scholarship by writing and winning  nation-wide essay contest on answering the question, "What Is Needed to Fix the Electoral College."

Camden is a member of Emmanuel Enid and currently works for the Red River Insitute of History as their Director of Operations while attending college.  Camden first heard about the contest and potential scholarship while a senior in high school. His high school guidance counselor at Chisholm High School told him about it. According to Cambden:

"This essay contest stood out to me because I saw it in the election season of 2020, where all over the news I was seeing poll numbers and maps showing which candidate was doing better and where. I kept noticing a pattern of how a majority of blue states had a majority of red counties. I didn’t feel like this was right, that a few cities can decide for an entire state where the electoral votes would go, so I mulled over a plan on how I would address this issue while remaining as fair to everyone’s views as possible."

Cambden will be flown to Washington D.C. to be recognized in Congress for his award-winning essay and then he will spend the week serving as a special intern on Capitol Hill.

Well done, Camden! We are proud of you!

Here is his essay:

The Electoral College is a system of electing a leader that is as unique as America itself. However, this does not mean that it is perfect. It has issues that need tending to. I believe that it, like many other aspects of American government, requires further work to become just and fair to all ideas and people.

One issue that I find with the electoral college is that it does not equally represent the voters in a given state. I’ll use the 2016 Presidential election as an example. In the state of Oklahoma, a known Republican stronghold, the Democratic candidate still received nearly one-third of the vote. A percentage that great shouldn’t simply be thrown away because it is not larger. Although the state only has seven electoral votes, one-third (rounded) of the electors would be Democratic in that instance. This occurs in many small-numbered electoral states each election, but the same instance happens in bigger states like California. Trump received one-third of the vote there, yet all 55 votes went to Clinton. That automatically silences an entire third of the state and nullifies their vote.

Another issue with the electoral college is that it tends to favor the popular vote. I do not believe “People vote, not land” for this simple reason; people from the same bit of land majorly vote the same. An agricultural, rural region is projected to vote Republican just as much as an industrialized, densely populated region is projected to vote Democratic. However, when a single Democratic city has the same population as several Republican states, there is not a fair expression of each. Our Founding fathers knew this, and built a government with many checks and balances to prevent it. As quoted by Benjamin Franklin, “Democracy is two wolves and a lamb voting on what they are going to have for lunch.” As our population has grown and our nation and politics evolved, the electoral college should not be an exception to change. It is not a popularity contest, and therefore we should not allow it to become such.

To summarize, the electoral college is unfair for it favors a potentially dangerous popular vote while not potentially not providing a level playing field for opposing political ideologies.  I believe a system that takes some power away from the majority while respecting the trends of ideas in different areas is necessary. What I would implement would be an electing process consisting of two main parts. The first would be a standard popular vote, not too different from what is already n place, but the second part is where the change occurs. To keep the popular vote from ruling an entire state, or swaying a nation, the percentages of the popular vote would be averaged out with the percentage of counties in the state that voted for a particular candidate. Then the election process would include the power of the popular vote leveled with the geographical trends of ideas. Then the party elector selected for the electoral college would be chosen based on the averaged percentage of both the popular and geographical votes, not just the majority. To test this new plan, look to New York state in 2016. Clinton ed with nearly 60% of the popular vote, even though she won only 16 of 62 counties. In this new method of electing, a popular margin without a major geographical standing would not alone win an election. It would have flipped the state in 2016, taking away the majority that New York  City imposed on most of the state. Then the Republican and Democratic electors, correlating with their average percentage won, would be cast into the electoral college system.

In conclusion, this new method of electing a President would incorporate more aspects and include more safeguards to ensure a fair process. Everyone gets a voice, but a popular majority will not be able to win as easily. This allows a rural midwestern farming region to rest assured that they will not be overshadowed by a city with millions in the opposing political party. This will provide security to liberty of expression and justice of representation for all while holding true to the philosophies and hopes our Founding Fathers had for this country.