Eighteen of the missing were wounded veterans, flying home on stretchers.  They were soldiers who had served the United States in the European War Theater. Flying with these injured veterans were a flight nurse, an Army Medic, and an Army Air Corp flight crew of six.

Somewhere between Iceland and Greenland, the C54 Air Ambulance crashed. Though search teams sought to recover the plane and bodies, the wreckage was never found, nor were the twenty-six bodies recovered.

As we celebrate Veteran's Day, November 11, 2021, I can't think of a better way to honor our veterans than to tell the recent story (2021) of the potential discovery of that C54 Air Ambulance and the remains of its occupants.

One of the 26 onboard that Air Ambulance was Lt. Col. Leon Robert "Bob" Vance from Enid, Oklahoma. Vance Air Force Base in Enid is named in his honor. The United States government would posthumously award Lt. Col. Vance the Medal of Honor for his heroic actions during the Normandy Invasion, actions that led to the wounds which had placed him on that Air Ambulance to fly home to Enid, Oklahoma, after seven weeks in a veteran's hospital in London.

The heroic story of how Lt. Col. Bob Vance earned the Medal of Honor is compelling. It is told via a holographic display in the exit lobby of the beautiful  Normandy American Cemetery and Memorial in Normandy, France. I have been there many times and will summarize:

Lt. Col. Bob Vance flew as co-pilot in the lead bomber, leaving England early on the morning of June 5, 1944, twenty-four hours before the infamous beach invasions of Normandy. Vance's B-24 bomber in which he flew was called the Missouri Sue. His mission was dangerous. The Germans expected an imminent invasion of France, but weren't sure where on the coastline, so German anti-flak, machine bunkers, and artillery were placed all along the Normandy coastline.

Reaching his German beach-front target, Lt. Col. Vance ordered the bomb bay doors open and all the Missour Sue's bombs released, a command followed by all bombers following his lead. But the bombs in Vance's plane failed to release on the first run, so Lt. Col. Vance ordered a 360-degree turn for a second pass over the target, a very risky move since German anti-flak was zeroing in on the planes. 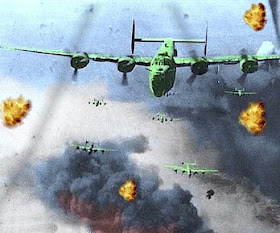 Somewhere in the process of the second bomb run, anti-flak repeatedly hit the Missouri Sue,  wounding several members of the crew, and killing the pilot. Lt. Col. Vance was also severely wounded, his right foot nearly severed, and the melted steel pinned what was left below his ankle to the floor. He couldn't move. From a reclining position, Commander Bob  Vance took over flying the B-24 bomber back to England.  One 500 pound bomb which had not properly release hung precariously in the bomb bay doors as the plane sputtered toward England.
As Lt. Col Vance passed over the Dover Cliffs of England, three of the four B-24 bomber's engines shut down. The fourth had to be manually shut down to prevent a stall. The damaged plane had showered gasoline all the way across the channel toward England. Vance, ordered his men to parachute to safety, and then he turned the plane back toward the channel during its forced descent  from 10,000 feet, not wanting the plane to crash on the English landscape with a bomb underneath, potentially injuring civilians.
Vance piloted the gliding plane back into the English channel where it crashed into the water. The force of the crash propelled Bob Vance from the plane and knocked him unconscious, his right foot now completely severed. Somehow Lt. Col. Vance managed to float to the surface where he was eventually rescued. The surviving ten men credited the actions of Bob Vance for their safe return to England." 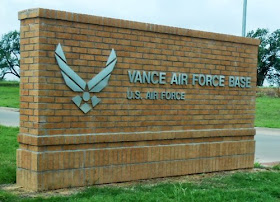 Vance recuperated in London from his injuries for the next seven weeks. Unfortunately, Bob's career as a pilot was over. His right foot was gone. He wrote letters home describing to his wife and family the injuries he sustained, urging them not to worry, and that as soon as he was able, he would be on a medical flight home to Enid. His letters were initially filled with excitement and enthusiasm for Operation Overlord, and he expressed pride for what his bombing crew had done in preparation for the landing.

His spirits lowered, however, when he left the hospital for the first time, hobbling on his crutches in the streets of London, and was met by a small boy who looked him over, saw his missing foot, and said, "Don't worry Yank, you won't miss it!" The emotional impact of realizing he would never fly again was enormous, and his depression increased when word came that his father, a longtime Enid High School football coach had been killed at the Enid Army Air Corp Traning Base where he served as a flight instructor. He died during a training accident.

The only thing that kept Bob Vance going during his recovery in London was the knowledge that he would soon see his wife, Georgette, and their two-year-old child, Sharon. Just before he left England, Vance discovered he'd been nominated for the Medal of Honor. 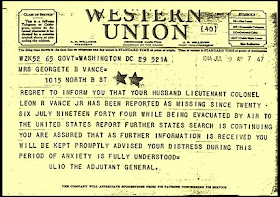 On Friday, July 28, 1944, Georgette Vance received a knock on her front door. An Army Air Corp officer and an Army chaplain from the nearby Enid Army Air Corp Training Base stood on her porch holding a telegram. They informed Georgette that her husband Bob was missing in action. Georgette collapsed in grief. Her two-year-old daughter Sharon tugged at her mother's dress, wanting to be held.
Later that fall (1944), the United States government informed Georgette that her husband had been bestowed the Medal of Honor. She requested that the official ceremony be delayed until her daughter, Sharon, was old enough to comprehend what her father had done. Two years later, on October 11, 1946, Sharon Vance, Bob's soon-to-be four-year-old daughter officially received the Medal of Honor on behalf of the Vance family at an official military ceremony in Enid, Oklahoma.

"Greetings, Wade. I have a ministry finding missing aircraft and bringing closure to families that hurt for years in wanting to know where their loved ones are. I recently found a debris field on the coast of Greenland that has the tail numbers of the missing C-54 that Colonel Leon Robert Vance was on with 25 other souls. I have images and coordinates. They have been presented to the Department of Defense (DPAA) for verification. I would be happy to share them with you and give you an update on the families I have been in contact with. My phone number is (202) ___ ___ . Thanks, Alan Hiatt."

As you might imagine, I was stunned. I immediately called Alan and since then have been in communication via email, text, and additional phone conversations. He has given me permission to post these photos from an isolated, unpopulated, mostly snow and ice-covered ravine-covered coastline of Greenland. He has a Senator from Maine involved with the DOD in an attempt to first verify, and then obtain the wreckage.
The following is Alan's story in his own words. Some of the photos he sent me from the debris field on the coast of Greenland will be interspersed throughout his written narrative.

"My father was a United States Army Captain stationed in Neu-Ulm Germany. My mother, sister, and I joined him there in 1954.
In August of 1956, my mother’s father was diagnosed with terminal cancer, and her family suggested that she should return back to the United States. My mother, sister and I flew from Frankfurt Germany on a DC-4 military charter flight, similar to the military C-54 Air Ambulance that went missing on July 26, 1944. We flew from Frankfurt Germany to Meeks Field, Iceland, where the aircraft was refueled, just like Vance's plane.
I remember the refueling stop well. It was approximately one o’clock in the morning and cold as we deplaned and waited for the refueling. After we departed Meeks Field we took off toward New York City. As the sun was coming up,   could see land on the starboard side of the aircraft. It was the southern tip of Greenland. We were following the same path that the the C-54 Army Air Ambulance followed a dozen years earlier.

Flash forward to October 2020.  I am flying on Google Earth up the southern tip of Greenland and all I saw was white from the snow.  Why was I going back up this coastline of Greenland? I was looking for a missing Air Ambulance that disappeared July 26, 1944 with 26 souls on board that never had the chance to return home to their loved ones. They had served their country in the European War Theater and were wounded in the invasion of France. Eighteen stretcher cases. one flight nurse, an Army Medic, and a flight crew of six on their way home when they disappeared without a trace.

I have a ministry searching for missing aircraft to help families find closure in the loss of their loved ones. I first took this mission up as a hobby because of my joy in flying (my mother was a pilot) and all the war stories I heard from pilots in Japan where we lived when the Korean War broke out. My father was one of the first responders into Korea and was wounded immediately and returned to Japan for treatment of his wounds.

While recovering at our home in Osaka, Japan my father would invite other wounded men to our home for R&R with some f them being pilots that flew missions in Korea and fly back to Japan from their missions. I would sit at their feet ( I was six years old) in our living room and hear firsthand about their missions. That is where I found my love for flying and my deep appreciation for our men and women in uniform. Some of the army personnel that came to our home were also nurses. When I first started searching for missing aircraft I called it a hobby but, after speaking with several families about missing aircraft I found very deep grief in their souls for their missing loved ones, not knowing what happened to them or where their bodies were. That is when I change my mission to a ministry helping people find closure in their lives.
The way I found the debris field in Greenland was an act of God. Again flying over the coast of Greenland with Google Earth I saw a red spot appear on the screen that got my attention.  I focused down to the area and changed the Historical Tool to a non-snow view and started finding the debris of an aircraft.

The first identifying debris was the 5-point white star, the word ARMY, the numbers 470, the number 70 on a wing section and it went on from there.

I have since communicated with several families that had loved ones on the aircraft and I am blessed with knowing them.

Now it is up to the powers of our Defense Department to respond to what I see and feel is God’s will to verify and if possible to RETURN AND RESTORE these precious souls to their families."

I will be in contact with Vance Air Force Base, U.S. Senator James Lankford, and the Department of Defense. I do not know what will be required for a mission to the east coast of Greenland to investigate the wreckage site, The coast is already covered with snow and ice for the winter. The next time it can be investigated is June/July 2022.
It would be a dream to recover the wreckage and any remains of the service members by July 26, 2024, the 80th anniversary of the crash.
As Alan Hiatt would say, "Lord willing."
Wade Burleson at Thursday, November 11, 2021
Share