It's an Agenda when the FDA Lies about Ivermectin 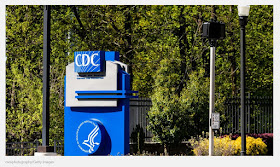 Covid-19 is a contagious disease. Though over 99% of people infected with it will survive, hundreds of thousands of Americans will die from complications related to catching Covid.  All Americans will eventually be infected with Covid since it is more contagious than the flu and there will be no cure. Some people will have Covid and experience long-haul symptoms. Most people will get sick with Covid and recover fully.

One death is too many. That is why the United States should do everything possible to mitigate Covid's disease symptoms.

And that is why it is a crime against humanity for the U.S. Center for Disease Control (CDC) and the Food and Drug Administration (FDA) as well as other U.S. government agencies to lie about ivermectin to U.S. citizens.

That's right. Government agencies charged with public health are outright lying to us, trying to pretend ivermectin is "dangerous to humans," "made for animals," and should be avoided at all costs.

For example, a recent national story appeared declaring that people in Oklahoma were "overdosing on ivermectin" and keeping emergency rooms clogged. I know a thing or two about Oklahoma hospitals. That story is not true. It is an outright lie, In fact, the very hospital mentioned in the story released a statement this past weekend.

"Although Dr. Jason McElyea is not an employee of NHS Sequoyah, he is affiliated with a medical staffing group that provides coverage for our emergency room. With that said, Dr. McElyea has not worked at our Sallisaw location in over 2 months. NHS Sequoyah has not treated any patients due to complications related to taking ivermectin. This includes not treating any patients for ivermectin overdose. All patients who have visited our emergency room have received medical attention as appropriate. Our hospital has not had to turn away any patients seeking emergency care. We want to reassure our community that our staff is working hard to provide quality healthcare to all patients. We appreciate the opportunity to clarify this issue and as always, we value our community's support."

You would have thought that the New York Times, ABC News, the Washington Post, and other leading news media outlets would have checked their facts before publishing such a nonsensical story about ivermectin overdoses. But no, it seems the agenda is to keep American citizens from thinking ivermectin is a safe, effective drug that mitigates Covid-19 symptoms.
As another example, the FDA tweeted the following: 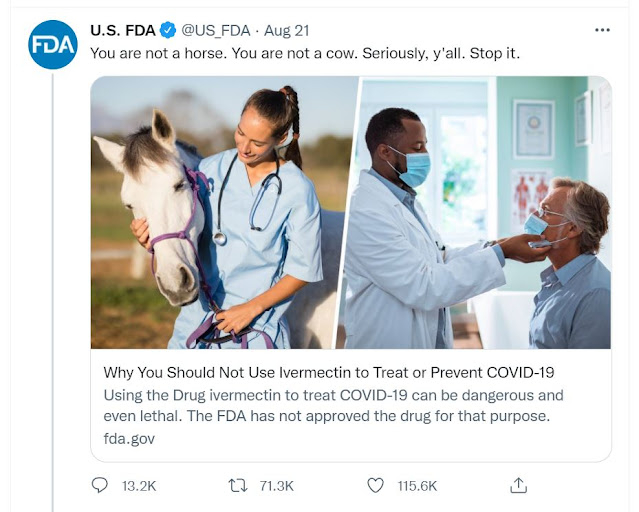 For the FDA to lie so blatantly, so publicly, about ivermectin, tells me that there is an agenda in the highest levels of government. The FDA themselves APPROVED Ivermectin for human consumption in 1996. Pharmaceutical-grade Ivermectin has been used for human consumption for DECADES. It is safe, cheap, accessible, and most of all, effective against the symptoms of Covid-19.
In fact, the U.S. federal government through the CDC is giving ivermectin to all AFGHANI REFUGEES that they are bringing to the United States. Do they think Afghanees are horses or cows? Of course not. They know that ivermectin is safe and effective against parasitic disease or they would not be prescribing it.  The following is from the CDC's own guidance for incoming refugees from the Middle East, Asia, Africa, Latin America, and the Caribbean. 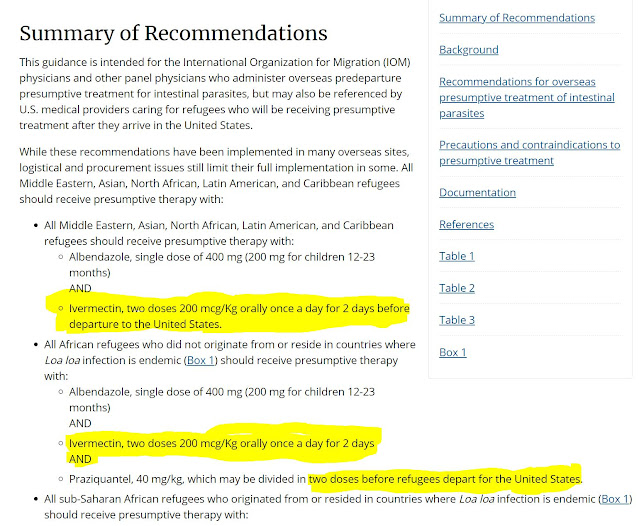 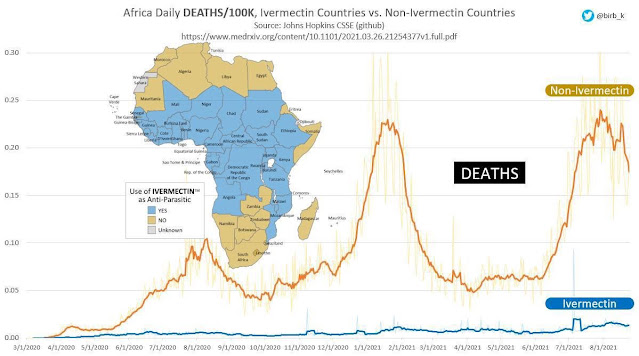 But it is not just African lives that have been saved by Ivermectin. India's Covid-19 problem disappeared with the widespread distribution of Ivermectin to India's massive population.

Ivermectin is not a cure for Covid-19. There is no cure. Ivermectin is a cheap, effective, accessible, and safe drug that mitigates Covid-19's symptoms. If a person takes Vitamin C, D, and Zinc daily, and then has access to human-grade pharmaceutical ivermectin at the onset of symptoms, they can greatly reduce their risk of hospitalization and death, by as much as over 90%.

"I have long been convinced that Nature has all the solutions we need to solve our past ... that will be the primary source of the treasures and solutions that we seek." ~Professor Satashi Omura, Nobel co-laureate for the discovery of ivermectin.

In March 2020, Dr. Satashi Omura, the Nobel Laureate discoverer of ivermectin, wrote in the Japanese Journal of Antibiotics that he hopes "ivermectin will be utilized as a countermeasure for COVID-19 as soon as possible." Ten years ago, Dr. Omura observed: "Ivermectin has continually proved to be astonishingly safe for human use. Indeed, it is such a safe drug, with minimal side effects, that it can be administered by non-medical staff and even illiterate individuals in remote rural communities, provided that they have had some very basic, appropriate training."
There are 8 things ivermectin does in mitigating the symptoms of Covid-19, keeping those who take it out of the hospital. Dr. Ryan Cole, a brilliant Mayo Clinic-trained pathologist, succinctly listed these eight different mechanisms in an exclusive interview with TheBlaze:

1. It inhibits binding at ACE2 and TMPRSS2, keeping the virus from entering our cells.

2. It blocks alpha/beta importin (the virus cell taxi), keeping it from getting to the nucleus.

4. It keeps the virus from assembling (3-Chimotrypsin protease inhibition).

6. It decreases IL-6 and other inflammatory cytokines through NF Kappa Beta downregulation, taking the patient from a cytokine storm to calm.

7. It binds NSP14, necessary for viral replication, and blocks it (equals less virus).

8. The most important mechanism is inhibiting binding to CD147 receptor on red cells, platelets, lung, and blood cell lining. Ivermectin keeps the virus from binding here and decreases deadly clotting.

There are several effective ways to mitigate the symptoms of Covid-19, but our United States government seems to want the masses to conform to only one - a therapeutic shot - and then to "keep track of those who have the shot" while making life difficult for those who don't.
Covid will never be eradicated like measles and polio because Covid comes from the animal kingdom, unlike measles and polio. Even though we can not eradicate Covid, we all should do our part to decrease its symptoms.

I write about Covid a great deal because there are two huge issues that Americans need to think through:

1. First, though Covid-19 is serious, it is minor compared to previous worldwide pandemics. However, the "powers that be" (WHO, the World Economic Forum, the FDA, the CDC, and the CCP) seem to have chosen Covid-19 as the trigger for a "great reset" for our world, moving nations toward a one-world unified government, a digital world currency controlled by the WEF, and top-down governmental control of the masses.

2. My second concern, is that people are believing the lies and letting government leaders get by with their crimes. When the CDC declares that NOBODY HAS TO PAY RENT ANYMORE because COVID IS SO SERIOUS, then the United States has turned into a communistic government run by dictators. Sure, the United States Supreme Court OVERTURNED the absurd CDC guideline, but our PRESIDENT supported it.

We are in trouble in the United States. And it is NOT COVID.

We have leaders in our government lying to "we, the people" and either too many people are disengaged and quiet or too trusting and naive to do anything about it. There's a "great reset" coming. It will affect your finances, your ability to travel, your bank accounts, and your job.

That's why I write about Covid-19 so much.