The Friendship of Ronald Reagan and Tip O'Neal 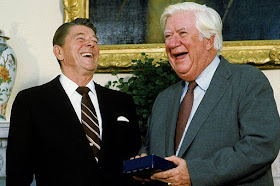 We're living in a day when people seem willing to sacrifice friendships for the sake of politics. Polarization is the norm. "Unite with me in politics, or I'll separate from you in friendship" becomes the mantra of many.

George E. Demacopoulos of Fordham University opines, “Most of us allow political allegiances to predetermine the moral calculus that we perform individually.”  Politics is the easy path. We find a problem, blame someone else, and nothing gets done.

But for disciples of Christ, we must refuse to take the easy road.
Love should trump our politics every day. There used to be a day when placing friendship and love before politics was the norm in America, for both Christians and non-Christians.
I remember those days. When I first began to vote at the age of 18, I had the pleasure to cast my first Presidential ballot for Ronald Reagan. I watched as the new Republican President of the United States formed a friendship with Tip O'Neal, the Democratic Speaker of the House.

Listen to essayist Stefan Kleinhenze describe the Reagan/O'Neal friendship of the early 1980s.

"(They) were opposites politically–yet they never allowed that to define their relationship. One time Reagan confronted O’Neill about some nasty things said in the newspaper, and O’Neil replied with: “That’s just politics, after 6 o’clock we’re buddies–we’re friends.” And that’s exactly what they were–frequently going out after work and simply having a beer together, and after Ronald Reagan was shot, the first person to come and visit him was Tip O’Neill. Reagan took it, that when things would get a little heated in some of their meetings, he would visibly set his watch to 6 o’clock, as a frolicsome reminder of their true identity in friendship.

The Christian life is to love. Mark Dayton, the governor of Minnesota, was once giving a speech to both state legislatures, when he suddenly collapsed. As he falls, the entire room of opposing opinions and beliefs stand up in unison out of concern for their fellow man, and those who were close, rush to catch him before he hits the ground. It’s a simple story, but a profound testament to the nature of humanity–that we are created to love. It is in the love of one another that we draw near to God, and it is in the love of one another that we find our political party. We should absolutely welcome politics, but never at the expense of our neighbor–because our opinions, discussions, and debates won’t be there to catch us when we fall. My brothers and sisters in Christ, the course of history has arrived at our hour, it is time we ask ourselves: is it 6 o’clock yet?"

I'm setting my watch.
How about you?
Wade Burleson at Tuesday, August 24, 2021
Share