Pride Stains Us All and Is Erased By a Painful Fall

Therefore if you have any encouragement from being united with Christ, if any comfort from his love, if any common sharing in the Spirit, if any tenderness and compassion then make my joy complete by being like-minded, having the same love, being one in spirit and of one mind.  Do nothing out of selfish ambition or vain conceit. Rather, in humility value others above yourselves, not looking to your own interests but each of you to the interests of the others. (Philippians 2:1-4) 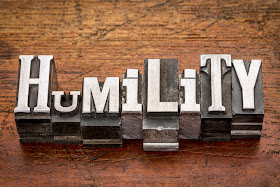 If anyone were to ask me how a true Christian can be identified in today's world, it would be the last sentence of the text above.


"In humility value others above yourselves, not looking to your own interests but each of you to the interests of the others."

At the church I pastor we have state prisoners who attend worship services weekly. The state Department of Corrections recently changed the rules for their attendance. Now, the offenders must wear their orange DOC pants and shirts. Unlike other offenders (that means the rest of us), a worshiper can spot incarcerated offenders immediately. They are forced to wear orange. It's a humbling experience to these Department of Correction inmates because they are forced by the state to do something they'd rather not do (wear orange jumpsuits when attending church). But God is changing their hearts. They come. They're different. They've been humbled.

These DOC men are paying for their crimes in prison. Justice is being served. As Christians who are the church called Emmanuel Enid, our job is to put the interests of these prisoners above our own.

There is another man who dresses like a woman and attends Emmanuel every Sunday and Wednesday night. He's made a choice to dress like a female. I've taken him to lunch and gotten to know his story. He's not homosexual, but he enjoys wearing a dress, pearls, high heels, getting his nails done, and all the lipstick and rouge associated with females in our culture.

The conversations I've had with this cross-dresser have been personal and at times painful. I've had to explain to him that he needs to use the Family Restroom at Emmanuel, not the men's restroom. We had another church attender, a woman with small boys, who expressed fear seeing the cross dresser go into the restroom with her young sons. This man knows that state and local laws forbid him from using the women's restroom. He'd be arrested. The law requires him to use restrooms designed for men because male is his birth gender. Dressing like a woman is a choice he's making, a choice that brings discomfort to some, including the fellow attendee with small boys who were using the same restroom as he. After our lunch meeting and discussion, he said he would use the Family Restroom in deference to others. He still attends Emmanuel.

Ironically, this cross dresser began attending two years ago at the invitation of a friend to see "if Christians mean what they say when they announce "We Love Everyone." He's been coming for two years and I believe he'd tell you that he considers me a friend and that he feels loved by me and others at Emmanuel.

To love someone means that we are willing to get to know that person, accept them regardless of their decisions or differences, and never hesitate to engage in tough, loving conversations for a good purpose. Unlike the Department of Correction inmates who attend Emmanuel, this man dresses the way he does by choice. Were he to desire membership at Emmanuel through publicly professing his faith in Jesus Christ, we would ask him if he's willing to give up dressing like a woman when he attends corporate worship for the sake of others.

Humility by deferring to others is the mark of genuine Christianity.

We don't expect non-Christians to defer to others. Pride puts self first. Humility puts others first. Al of us by nature are proud. Supernatural grace from God breaks the proud and makes them humble. Those who desire membership at Emmanuel must show evidence of a willingness to put others first because humility is the key trait of true Christianity.

Emmanuel has some well-dressed adulterers, addicts, and abusers who also attend our corporate worship services. We welcome them all. Many of them cover their selfish actions and have never been humbled. But every now and then one of them lands on the front page of the local newspaper. The scandalized in Enid are welcome at Emmanuel. We let them know that we accept them where they are, but we also know that God's grace will never leave them where they are. It's God's business to take them to that place where they haven't yet arrived.

God gives His grace to humble the proud. And he uses His people to convey that grace which humbles.

The Problem of Pride

There are number of growing events in American culture that celebrate immoral behaviors with the word PRIDE. Edmond, Oklahoma is hosting its second Edmond Pride event this Saturday, October 12, 2009, celebrating behaviors that the Bible calls sexually immoral.

It's difficult for my homosexual and lesbian friends to see how I can love them like Jesus loves me and still call their sexual behaviors immoral.

I understand why it's hard for them to understand.

They vocally take pride in their sexual orientation, believing it to be the way "God made me." I disagree with them on the origin of their homosexuality, but my disagreement doesn't mean I can't be their friend. It also doesn't mean they can't attend worship at Emmanuel.

It does mean, however, that they can't be a member of Emmanuel Enid.

Emmanuel Enid loves people where they are. We can't take out someone's pride. Only God can.

To be a member of Emmanuel, one must show evidence of God's grace which is seen in the humility of a heart that puts the interests of others before his own.

"Do not be deceived: Neither the sexually immoral, nor idolaters, nor adulterers, nor men who submit to or perform homosexual acts will inherit the Kingdom of God." (I Corinthians 6:9)

It's not within our capabilities to make a person not proud of behaviors that the Bible calls wicked, selfish, or ungodly.

We just love people where they are and pray for the grace that humbles. People may get angry that Christians who believe the Bible refuse to celebrate with pride those behaviors the Bible calls immoral.

Sure, even Christians struggle with sins of sexual immorality and sins of the heart like pride. But once grace breaks through, the pride begins to disappear and a willingness begins to arise to lay aside one's preferences for the sake of God and of others.

The Bible is clear that...


"Pride goes before destruction, a haughty spirit before a fall" (Proverbs 16:18)