I admire your love for Christ, your study of the Scriptures, as well as your systematic theology.

You all know that we share a mutual love for what is historically called The Doctrines of Grace.

I've believed in the doctrines of grace since I memorized the book of Romans as a boy.

My wife and I have been with you at many of the same conferences and conventions.

Rachelle once asked me a pointed question:


"Wade, why do so many Southern Baptists and Christians in general say they believe in "the doctrines of grace," yet they act so ungraciously toward Christian people?"

It's a good question. Oh, I know plenty of legalistic, Fundamentalist Arminians who are hostile toward anybody who disagrees with them.

But one doesn't expect such hostility from those who say they believe in grace.

So here's my question for you:


"What in the name of John Calvin are you doing when it comes to the social media bullying of Beth Moore and her biblical position on women in SBC leadership?"

Owen Strachan, you started it with one of your Tweets. 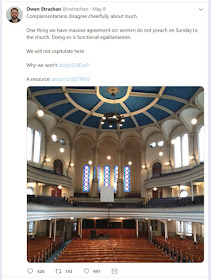 Al Mohler, you continued it with one of your Tweets. 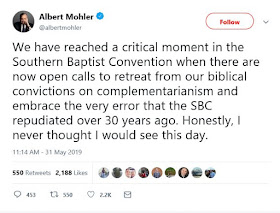 Dr. Mohler, the SBC leaders who wanted Miss Bertha Smith on faculty at SWBTS to teach our preacher boys how to pray were all believers in the infallibility and authority of the Scriptures. Beth Moore and other gifted women in the SBC are only walking in Miss Bertha's footsteps.

But Dr. Ascol, I'm saving my most pressing questions for you. I know you better than Al or Owen, and I must say, you really surprised me with this Tweet: 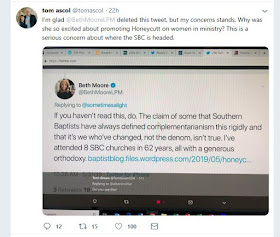 Do you know why Beth deleted that Tweet? I can't say for sure, but I've been around the block a few times, and I know bullying tactics when I see them.

She's family, guys. Cut it out.

Pick on me, Tom. I've written more on the subject of New Covenant gender equality than Beth Moore ever thought of writing. Beth does Christian ministry. She shouldn't need to defend her ministry to Southern Baptist caucasian males who've fallen into the doctrinal trap of the eternal subordination of women.

By the way, Tom, I look forward to watching and observing you debate my friend Dwight McKissic on whether women should be allowed to "preach" in our (Southern Baptist) "Lord's Day" worship services. I sure wish I could ask some questions of you regarding your definitions of "preach" and "Lord's Day" and "church," but regardless, it will be my privilege to be at the debate and observe, listen, and learn. 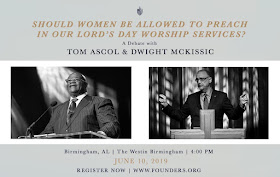 Tom Ascol, I heard that Hebrew professor Sheri Klouda will moderate that debate. I look forward to observing your submission to her instructions, which of course, will evidence the Spirit in you since the Bible commands a spirit of mutual submission within all Christians toward one another, regardless of gender (see Ephesians 5:21).

But back to Beth Moore.


"We're not attacking Beth Moore! We are protecting the Southern Baptist Convention from going down the path toward the ruination of biblicism." 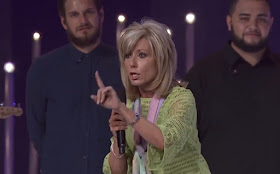 So that's why you shamed Beth Moore for "linking" to an article on Christian women in ministry by Dr. Roy Honeycutt. the former  President of Southern Seminary (1982-1993)?

You shamed Beth for "linking" to an article written by Dr. Roy Honeycutt, a man that she probably never met before he died?

That's such an old tactic.

Dr. Patterson told me Roy Honeycutt was "the enemy" back in the early 80s. So did Judge Pressler.

"Oh sure," they'd tell me and others, "Dr. Honeycutt is an irenic Hebrew scholar. But that's the most dangerous kind. Yes, he 'says' he believes in the infallibility and authority of the Bible, but he's our enemy."

I believed them - then.

I also believe the Southern Baptist Convention as a whole understands what is now happening to some of those once powerful men. Pride, indeed, comes before a fall.

By the way, Tom, I went back and actually read the awful, evil pamphlet written by Dr. Honeycutt on gifted Christian women in Southern Baptist ministry, the pamphlet Beth pointed out with a link. It's the first time that I've read it.


"Let no one misunderstand the commitment of this seminary to biblical authority." (p. 3)

Tom, Dr. Roy Honeycutt believed the Scriptures were the final authority for all Christian practice. One of these days, you may understand that your demands for conformity on tertiary issues are antithetic to Christian living.  In essentials unity; in non-essentials liberty; in all things charity.

Stop denigrating those who believe in biblical authority (like Beth Moore) just because they don't agree with your interpretation of the Bible. That's grace.


"...we accept no student into a degree program at Southern Seminary who is not...committed to Christian ministry." (p. 6)

Uhm, Tom, it was President Paige Patterson, the so-called "architect" of the Conservative Resurgence and former President of Southwestern Seminary in Fort Worth, who admitted a practicing Muslim into the seminary. Paige did what Roy Honeycutt would never do. Tell me again, Tom, the definition of liberal in your eyes?


"In the admission of women committed to Christian ministry, the seminary deliberately shares decision making with local congregations." (p. 9)

Amazing Tom, is it not, that all the white caucasian males who lead the SBC today will shout "church autonomy" as the reason for not holding Southern Baptist churches accountable for allowing sexual predators to move freely within the Convention, but YET, when it comes to "gifted and humble Christian women of character ministering in local Southern Baptist churches," church autonomy is nowhere cited?

Except by Dr. Roy Honeycutt.

If I didn't know any better Dr. Mohler, Dr. Ascol, Dr. Strachan, et al., I would say that what is happening in the Southern Baptist Convention today, those things that cause you "concern," are not things that will lead to the ruination of biblicism in the SBC.

Rather, what is happening is a restoration of true biblicism, a return to real evangelism, and a revival of genuine congregationalism in our Southern Baptist churches.

The power games are over.

Christ alone rules in the hearts of His people and Christ tells us to love one another as He loves us.

Beth Moore is a gifted teacher. She's a Southern Baptist biblicist. She may disagree with you on certain points of theology, but it is far more beneficial to our Southern Baptist Convention to give grace to friends who disagree than to bully friends to see it your way.

Dr. Hershel H. Hobbs and I were friends for many years before he died in 1995. Southern Baptists once considered Dr. Hobbs the Southern Baptist Convention's premier theologian.

Hershel and I often debated theology. But we never let our differences get in the way of our friendship.

I consider William Paul Young, author of The Shack, a very close friend. I've watched Paul minister to men and women in my church in such Spirit-filled, life-transforming moments for each person who had the privilege to spend some moments with Paul, that I've modeled my pastoral ministry after what I learned from him.

Paul Young is a "hopeful universalist." He and I are on opposite ends of the theological spectrum, but he is a dear friend, and I dare say I've seen him accomplish more for Christ's Kingdom than any 5-Point Calvinist that I call a friend.

Former President Jimmy Carter is a friend. I don't think I've ever voted anything but straight-line Republican my entire life. Yet President Carter is one of my heroes. I may not align with him politically, but it's my honor to call him friend and brother-in-Christ.

Dee Parsons,  no Calvinist herself, features our worship services at Emmanuel Enid, a church where I have served for nearly thirty years, on her website Wartburg Watch. Dee advocates for victims of physical, sexual, and spiritual abuse. Dee and her friend Wanda, both of whom were instrumental in the creation of Wartburg Watch, are friends of mine. They are making a difference in the Kingdom. We don't agree on soteriology, but we understand Christian fellowship.

Why can't you be friends with someone who doesn't agree with your position that Spirit-gifted women of character should be silent on "the Lord's Day" and let men lead?

Could it be that fellow biblicists who believe in the authoritative nature of God's word (inerrantists like I am) can disagree with you and remain your friends, fully cooperating in all aspects of the SBC?

Of course we can. That should be a no-brainer.

Beth Moore is a God-honoring, Christ-exalting, Spirit-indwelling, Bible-believing teacher of men and women in the Kingdom of Christ.

She believes that spirit-gifted, humble Christian women of character should serve and minister in their local autonomous churches, exercising their gifts as the church sees fit (in contrast to your views). If you continue to go after people like Beth Moore and others, you will destroy the Southern Baptist Convention that you say you love.

I for one will never again allow our SBC leaders to betray our trust by convincing us that our friends are our enemies. I realize that you say, "No, THEY are not our enemies, but what they BELIEVE is our enemy."

It no longer works.

We should learn how to fellowship, cooperate, and agree to disagree.

The Word of God is infallible and inerrant. Your interpretations are not.
Wade Burleson at Saturday, June 01, 2019
Share