Abortion, 12 Boys in a Cave, and a Profound Riddle 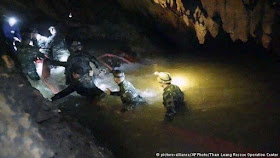 This week's announcement that Brett Kavanaugh has been selected as Supreme Court Justice Anthony Kennedy's replacement has many expressing fear and anger that Roe v. Wade might be overturned and that abortion in America will be outlawed.

Juxtapose those negative emotions with America's collective joy over 12 boys being safely rescued this week from a Thai cave.

It's confusing to me how many Americans can feel such happiness over boys being dramatically rescued from death in Thailand, while at the same time express such anger over the possibility of Americans being unable to bring intentional death to babies.

I may be the only person who thinks along these lines, but I'd like to point out the similarities between the boys in Thailand and babies in American mothers' wombs.

Those who know me recognize there's not a judgmental bone in my body. I listen to people. I can change my mind when sound, logical reasoning convinces me of my faulty thinking.

I'm looking for an answer to the riddle.

I have friends who've had abortions. I've spoken with them about their decisions. Typically, an abortion seems to be a way out of the consequences of poor choices made in life.

But during mitigating circumstances, sorrow is the emotion of all involved. Sorrow is never the endpoint. God has a way of turning sorrow into joy.

Let's go further in comparisons of the Thai boys' dilemma with those of babies in American wombs.

The coach made a poor choice to go exploring with his soccer boys during monsoon season when caves often flood.

But did we kill the boys because of the soccer coach's poor choice?

No. We saved the boys' lives.

In seeking to resolve the riddle some might conclude that expectant American mothers' could say:

"It's my cave. It's my decision. It's my life. I want to abort the baby and end its life, and anybody who tries to stop me is my enemy."

I'm thinking. Give me a moment.

That argument makes me want to find the owner of the cave in Thailand and ask him if anyone sought his permission to enter, or if the government asked for permission to save the lives of those boys.

I would think, though I don't know for sure, that the cave owner was not involved in the decision to save lives.

Saving lives is not an individual choice; it seems by necessity to be a societal responsibility. Prizing life is evidence of civilization. When society wishes to bring intentional death, it means the downgrade and eventual collapse of civilization (e.g. "war").

Maybe somebody believes babies in the womb are not human until they can breathe, eat, and live without help from others.

But that doesn't answer the riddle over differences either. The boys in the cave couldn't breathe, eat, or live without help from others.

What's the difference between boys in a cave in Thailand and babies in wombs in America?

Why did so many Americans rejoice over saving the lives of the Thai boys but angrily demand the right to kill American babies?

I seriously want to know the answer to the riddle.