Fight in the Name of Your Temporal Government, Not Your God: ISIS and the Follower of Christ 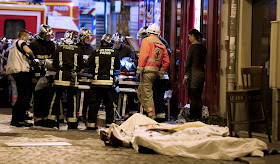 I have read more than a few people on Facebook invoke the name of Jesus and their Christian faith when calling for "war without pity" on the cold-blooded ISIS murderers in Paris.

That's very unwise. Without doubt every Jihad John assassin should be hunted down and killed. Every Parisian murderer should be tracked and his life taken from him swiftly. The French President initially called for "war without pity" on ISIS, and he's absolutely correct. The United States, Russia, France, and every European country that loves freedom should bomb ISIS command centers, supply depots, and training compounds. Bomb them mercilessly. But always do it in the name of one's government, never one's Christ.

500 years ago Martin Luther faced similar circumstances to what Christians face today. The Ottoman Empire (Muslim) rapidly expanded their territory into Europe through terrorism and organized armed advancement during the 1510's and 1520's. As the Holy Roman Empire (Germany) armed itself to fight the Turks, Luther opposed armed resistance and wrote:


"To fight against the Turk is the same thing as resisting God, who visits our sin upon us with this rod.” (Explanation of the 95 Theses, 1518).


"It is a gentle holiness to abstain for devotion from resisting the Turk, and in the meanwhile to rise up in routs and fight against Christian men, and destroy as that sect has done, many a good religious house, spoiled, maimed and slain many a good virtuous man, robbed, polluted, and pulled down many a goodly church of Christ."

To put More's argument against Luther in modern terms: "Luther, why the heck do you consider Catholics more of an enemy than you do the Turks?"

Within a decade Luther changed his mind about fighting the Ottoman Empire. In 1528-1529 as the radical Islamic terrorists surrounded and laid siege to Vienna, Austria, Luther wrote a short pamphlet entitled On War Against the Turk. Luther's little pamphlet, available in English,  is difficult to understand for the person unaccustomed to comprehensive reading. In essence, Luther argues for war against radical Islam in the name of temporal government, not God. I would urge any Air Force pilot, Army soldier, Navy sailor, or Marine commando who confesses to be a Christian to read Luther's  On War Against the Turk.

I won't get into the reasons Luther changed his mind (you can read it for yourself), but I will summarize Luther's argument with this succinct statement:

War is a temporal state, fought by temporal governments, to bring about a temporal peace.

The best illustration of the above principle is Field Marshal Earl Wavell's comment on the treaties that brought an end to the First World War. He said:


"After 'the war to end war' they seem to have been pretty successful in Paris at making a 'Peace to end Peace.'"

Wavell understood that both war and peace are only temporary. We Christians belong to an eternal Kingdom "that is not of this world" (John 18:36).  Christ will one day usher in His eternal Kingdom on this earth - either through His physical return or His spiritual reign in the hearts of all people (depending on your eschatology) and that's when "the meek will inherit the earth" (Matthew 5:5).

Until that time of Christ's reign, "temporal governments make temporal war to create temporal peace." If you must fight radical Islamic terrorism, and it seems the world is now being called to fight, we must make sure that we fight in the name of our temporal governments, not God. Luther puts it like this (emphasis mine):


"Christ says that a Christian shall not resist evil, but endure all things, let the coat go and the cloak, let them be taken from him, offer the other cheek..."

"The Church ought not strive or fight with the sword; it has other enemies than flesh and blood, their name is the wicked devils in the air; therefore it has other weapons and swords and other wars, so that it has enough to do, and cannot mix in the wars of the emperor or princes..."

"Nevertheless, what the emperor (state government) can do for his subjects against the Turk, that he should do, so that even though he cannot entirely prevent the abomination, he may yet try to protect and rescue his subjects by checking the Turk and holding him off. To this protection the emperor (state government) should be moved not only by his bounden duty, but by his office"

"It is a fact that the Turk is at our throat, and even if he does not will to march against us this year, yet he is there, armed and ready any hour to attack us, when he will, and yet our princes discuss, meanwhile, how they can harass Luther and the Gospel. It is the Turk! Against it force must be used! It must be put out!"

As a side note, at the very time Luther wrote A War Against the Turk, he penned a church hymn entitled A Safe Stronghold Our God Is Still, or otherwise translated A Might Fortress Is Our God, writing the hymn as the Turks approached Vienna in 1529. The truth of that hymn is very real - and very personal. It's a great song to sing as a follower of Jesus.

However, when a professing Christian raises his hand and swears allegiance "to support and defend the Constitution and the laws of the United States" against "all enemies, both foreign and domestic," he or she must never forget that she is swearing


"to bear arms on behalf of the United States."

We will fight Islamic terrorism. We are at war. We will fight ISIS like our forefathers fought the Nazis.  However, we fight for the temporary government of the United States of America (or Canada, or France, or Russia, or etc....) and not God. Let's keep our faith and our Christ separate from our government and war.
Wade Burleson at Saturday, November 14, 2015
Share