Southwestern Baptist Theological Seminary in Fort Worth, Texas has been providing theological education for Christian men and women since 1908.

Something very strange and bizarre is happening at Southwestern and Southern Baptists should intervene before we lose our seminary to evangelical irrelevancy.

Ghassan Sa'id (last name removed) is a Ph.D. student from Egypt studying archaeology at Southwestern Baptist Theological Seminary and will begin his third and final year in the School  of Theology this fall, under the leadership of David Allen, dean of the School of Theology, and Dr. George Klein, Senior Associate Dean for the Research Doctoral Program.   Professors of Archaeology for Southwestern include Dr. Eric Mitchell, Chair;  Dr. Tom Davis, and Dr. Steve Ortiz. When Ghassan finishes his studies, he will receive a Ph.D. in Biblical Studies with a major in archaeology from Southwestern Seminary's School of Theology.  In a faculty meeting in 2012, Dr. Patterson warned anyone who questioned him about Muslims being admitted into Southwestern, or anyone who was disloyal to him and discussed this matter with others not associated with Southwestern would be terminated. Dr. Patterson went on to explain that "it is not necessary to be a Christian" to enroll in Southwestern's Ph.D. program.

The campus is abuzz. Many faculty are upset. Yet, most are afraid to say anything because of 'repercussions.' I've been told by students, "I don't want my transcripts blocked for speaking out" and many of the faculty are concerned for their jobs. All the while, Dr. Patterson acts as if there is nothing wrong with Southern Baptists, through the Cooperative Program, funding the theological education of practicing Muslims. He is intending to enroll a father/son Muslim team in the near future. Dr. Patterson is turning SWBTS is school without Christian distinctive. I find it ironic that he fired Dr. Sherry Klouda for teaching Hebrew because she 'was a woman', and argued before the courts that Southwestern was 'a church' and that the courts had no business ruling on gender roles within ecclesiastical institutions. Using Dr. Patterson's same argument, I have a question for him: Would a Southern Baptist pastor allow a member into his church who refuses to acknowledge Jesus Christ as Lord and Savior?

Ironically, Southwestern Baptist Theological Seminary's own policy forbids enrolling anyone who refuses to acknowledge Jesus Christ as Lord and Savior!  If one goes to the Admissions Page for Southwestern Theological Seminary and starts the process of enrollment into the Ph.D. program at the School of Theology. On page 5 the application form requests that the applicant "explain your decision to follow Jesus Christ as Lord and Savior." The admissions office informs the applicant that his or her answer to this question will be very important as to whether or not the applicant is allowed to enroll at Southwestern. The application for admission puts it like this:

"Southwestern is charged with equipping called men and women for effective Kingdom Service. The Admissions Committee is especially interested in reading about your commitment to Christ and plans for Christian service."

So, Paige Patterson ordered his admissions staff to act contrary to the school's policy and charter, the will of the Southern Baptist Convention, and possibly to even contrary to the will of his own trustees (?). The admission of a practicing Muslim who prays toward Mecca five times a day, who refuses to acknowledge Jesus Christ as Lord and Savior and who will leave the School of Theology and presumably work against the good news of Jesus Christ is something that should concern every Southern Baptist who funds theological education with Cooperative Program money.

We Southern Baptists believe in freedom. We believe that Muslims should have the right to believe

as they wish, pray as they wish, and enjoy all the civil liberties that we Christians enjoy in America. I have many Muslim friends. I have spoken at Muslim meetings here and abroad. This issue is not about Baptists not liking Muslims. Not at all. The issue is about Southern Baptists funding seminaries like Southwestern Baptist Theological Seminary to the tune of three million dollars annually and having a seminary led by a President who overrides the wishes of the Convention and rules by fiat, not principle.

This issue is one of integrity and ethics, and if not addressed, ultimately an issue of power. Who actually determines how the Southern Baptist Convention will conduct ourselves? Southwestern Baptist Theological Seminary is becoming something other than Southern Baptists intended at its formation in 1908. When faculty members are afraid to speak up over a violation of school policy and charter requirements because of a fear of firing, then "Fort Worth, we have a problem."

This past Monday, Paige Patterson terminated Dr. Craig Mitchell, Director of the Richard Land Center for Cultural Engagement (see picture to the left). Dr. Mitchell, the first African American ever appointed to head an institution of the Southern Baptist Convention, was released by Patterson's fiat. Dr. Mitchell testified before Congress in 2012 regarding the ethical dilemma of ObamaCare providing for abortions. Dr. Mitchell is a product of a Southern Baptist Theological education, well-liked by students and faculty alike, and has a national reputation for scholarship and excellence. I have not yet spoken to Dr. Mitchell. I do know Dr. Mitchell's firing has not been publicized, nor has his bio been removed (as of Friday, May 16, 2014), from Southwestern's web page, but that will probably change by this weekend. I found out through friends of Dr. Patterson that they were told by the President of SWBTS of his firing.  Here is what I don't understand. The President of a theological institution is firing the Director of his Center for Cultural Engagement for allegedly making a 'joke' on his Facebook account (something like "if you have to spend thirty minutes putting your make-up on, you are probably too ugly to begin with") and three other allegations just as strange, yet at the same time, the SWBTS President is secretly--and against the will of the Convention and stated policies of his own school--mandating the theological education (and funding) of a practicing Muslim by the School of Theology. Maybe the wrong person was fired last week.

At a prayer meeting this past fall, several International Mission Board missionaries and employees from foreign countries were invited to participate, along with students at Southwestern Theological Seminary. As introductions were being made, Ghassan introduced himself as "a Muslim" at Southwestern. Thinking that he had said "a minister to Muslims," one of our IMB missionaries responded, "And where do you minister to Muslims?" Ghassan responded, "No, I AM a Muslim. I believe there is no God but Allah, and Mohammed is his prophet." Immediately, our IMB missionaries began removing their name tags. Some of those missionaries were in Security Three zones where their very identity is supposed to be protected. (Editor's note: The previous anecdote is summary of what was told me by two people at the meeting). 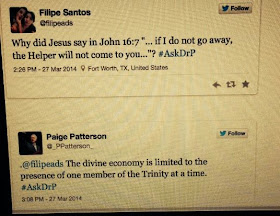 Some have suggested to me that Paige Patterson has a theological problem. Dr. Patterson has  tweeted about the Godhead and displayed a measure of modalism that is shocking, especially coming from a seminary President. He tweeted in response to a theological question asked of him, "The divine economy is limited to the presence of one member of the Trinity at a time."  One would hope a junior high boys Sunday School class would be able to respond with better theological precision than Patterson displays. Nevertheless, I'm not convinced that the problem with Dr. Patterson's leadership is solely theological.

I believe Dr. Paige Patterson's leadership can be faulted on the grounds of ethics. He is bypassing the rule of those who govern him (trustees), threatening those who work for him if they dare question his decision to admit Muslims to Southwestern Baptist Theological Seminary. Maybe he's hoping that the people of the Southern Baptist Convention will not care what he does because he is "Paige Patterson."

Well, I care. My church cares. You, too, should care. I plan to be in Baltimore for the Southern Baptist Convention to ask other Southern Baptists their feelings about having their Cooperative Program dollars pay for the education of Muslims at Southwestern Seminary.

It's time someone holds Dr. Patterson accountable for his actions.
Wade Burleson at Friday, May 16, 2014
Share