The Sleep of Reason Brings Forth Monsters 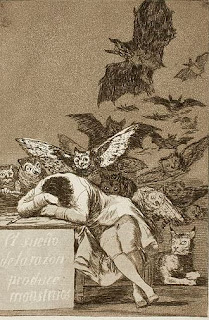 I've been researching the 1920's and 1930's in Germany and comparing the similarities between that historic Christian nation during those two turbulent decades and the United States today. In politics and religion in both countries (then and now), the masses follow those with great oratorical skills. If you ever wonder how great throngs of people can be so duped, one needs to look no further than the power of speech to motivate.

Adolph Hitler came to power in Germany during 1933. For over a decade he had been speaking in pubs and rallies, swaying the German people with his extraordinary speaking ability. Interestingly, in 1925 Hitler wrote his political autobiography Mein Kampf and the Germans were shocked with the poor thought processes and logic of their future Fuhrer. People who had been so entranced by Hitler's oratorical abilities blanched at his illogical ideas. Mein Kampf was disjointed and sometimes senseless. Hitler jumped from a lengthy diatribe on modern fashions to the merits of boxing. He moved easily through a commentary on the dangers of syphilis to the majestic nature of Richard Wagner's opera Parsifal. His belief in the legend of Aryans led to a Mein Kampf rant on the perils of racial inter-breeding and the menace of the International Zionist conspiracy. In 1925 with the publishing of Mein Kampf some began to believe Hitler was insane because of his writing, but by 1933 Hitler the people of Germany elected Hitler as their Chancellor because of his speaking.

One of those swayed by Hitler's oratory was Joseph Goebbels. Hitler's close friend and the man who would become the Nazi Minister of Propaganda wrote in 1936 about Hitler's oratorical abilities. Pay close attention to Goebbels explanation for why Hitler could sway people by speaking:

(Hitler) is a rhetorical genius who developed his own abilities with no help from anyone else. One cannot imagine that the Führer ever spoke differently than he does today, or that he will ever speak differently. He speaks his heart, and therefore reaches the hearts of those who hear him. He has the amazing gift of sensing what is in the air. He has the ability to express things so clearly, logically and directly that listeners are convinced that that is what they have always thought themselves. That is the true secret of the effectiveness of Adolf Hitler’s speeches.

Ordinary life is presented in a way that grips the hearers. The problems of the day are not explained only with the difficult tools of a worldview, but with wit and biting irony. His humor triumphs; one cries with one eye and laughs with the other. Every tone of daily life is touched upon.

Methinks modern evangelical churches in America have fallen into the perilous waters of 1930's Germany; masses moved by verbal magicians. We have great communicators in the pulpits of America who move hearers with emotion, but spend little time educating Americans with biblical wisdom. When an evangelical pastor can cause his congregation to "laugh in one eye, and cry in the other" and arouse from them a standing ovation for him, all the while avoiding the critical components of Scripture that seem to teach and mitigate against his own behavior, then we evangelicals in America have more in common with Nazi Germany than we do the Kingdom of God.

The sleep of reason brings forth monsters.
Wade Burleson at Monday, October 28, 2013
Share