'The' Woman of Error in I Timothy 2:12 Shouldn't Teach 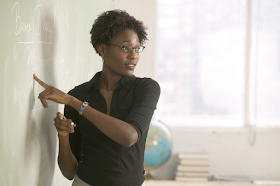 When the principles and practices of the kingdom of God are made subordinate to the traditions of men, the power of Spirit-filled living becomes a figment of our collective imagination.  When religious leaders place shackles on God's people to keep them from functioning as He has gifted them to function, the church becomes a powerless shell of immobility. Without the vivifying energy of the Spirit in the body of Christ, the King's men and women become regal attendants fighting at each rather than royal ambassadors working with each other. If you have ever experienced a dead church, you know intuitively that the deadness occurs because leadership is controlling guilty people rather than empowering gifted people. The Scripture is emphatic that the Spirit gifts His people--men and women--with gifts of teaching, service, leadership, mercy, organization, etc... Good leaders get to know their people, find out how they are gifted, and empower them to fulfill their calling.

The Bible is replete with examples of men and women gifted by God to teach and to lead. No Bible-believing Christian seems to have a problem with men leading or teaching, but women fulfilling those roles, as gifted by the Holy Spirit, seems to cause consternation in the lives of some who are more familiar with tradition than truth. We have dozens of illustrations in the New Testament of women teaching men (Priscilla, Anna, Philip's four unmarried daughters, and many, many more). There are also dozens of additional illustrations in the Bible of women leading men.

I Timothy 2:11-15 Is the Text Used by Men to Restrict Gifted Women

Following is the text that is used to stifle women. I have placed only four words in (bold) that more accurately translate what Paul is saying, words that are a direct translation of the Greek. The reasons for the four words I supply will be explained below:

"Let a (the) woman learn in quietness and full submission. "12I do not permit a (the) woman to teach or to assume authority over a (the) man; she must be quiet. 13 For Adam was formed first, then Eve. 14 And Adam was not the one deceived; it was the woman who was deceived and became a sinner. 15 But women (lit. "she") will be saved through childbearing—if they continue in faith, love and holiness with propriety."

The verses above seem to say, at least on the surface and without the four words I've supplied, that no woman should ever teach any man; that no woman should  ever assume any 'authority' over any man; and that all women must always be quiet in the presence of men.  Of course, most evangelical conservative men would say that the Apostle Paul was only addressing women "in the church" and "in the home" so that women in the political world, corporate world, and secular world, are not under these restrictions. I find it humorous that conservatives complain of "potential malignancy" in one's gospel orthodoxy if one can find a way to make this I Timothy 2 text say that it is okay for women to teach men or have authority over men "in the church." Why is that humorous to me? Because those same conservative men have already found a way (rightly so) to explain how a woman can have leadership over a man and teach a man in every other realm of life (politics, business, etc...). Do we remember when Condi Rice, Secretary of State, spoke to the Southern Baptist Convention in 2006? She taught us Southern Baptist men a great deal about war and the bombing of terrorists, and we applauded her leadership as Secretary of State. So much for the gospel malignancy theory.

But back to the I Timothy 2 text above. For those of you "in the church" who get stuck on this text, and as a result, refuse to have women read the Bible in public at church, or teach a discipleship class with men in it, or refuse to have women serve as trustees, or elders, or committee chairpersons "in the church: lest they 'assume authority' over men, let me help you see how you are totally ignoring the clear teaching of the New Testament in favor of a poor and false interpretation of these I Timothy 2 verses. For all you out there in cyberland, and for a few of you in local churches who want to make women in leadership an issue of gospel orthodoxy, I will provide below a very clear interpretation of I Timothy 2:12-15 that is consistent with the rest of the New Testament's teaching on empowering women in their giftedness. There are five basic principles that must be understood in order to rightly comprehend what Paul is saying:

(1). Paul is addressing a problem Timothy had with a specific woman teaching heresy to a specific man in the church at Ephesus.

How do we know this? There are at least four grammatical reasons:

(a). Paul gives instructions to "women" (plural) in the beginning of chapter two (i.e. how to dress modestly, live of life of good works, etc...), but beginning with verse 11, Paul switches from the plural noun (women) to the singular noun (woman). The definitive article "the" is in the original Greek (i.e. "the woman"), not the unfortunate translation "a" woman (NIV; NASB).  Paul moves from instructions to women in general (vs. 9-10) to a very direct instruction for a specific woman in verse 11. You can verify this quite easily with any online interlinear.
(b). The “she” in verse 15 is third person singular (again, the NIV and NASB unfortunately mistranslates the third person singular Greek pronoun in v. 15 with the plural English noun "women"). The "she" of verse 15 is the same woman in verse 11 and verse 12. She is the woman who needs correcting.
(c).  "...if they continue" (v.15). The word "they" is the accurate translation of the third person plural used by Paul. This plural pronoun identifies not only the woman doing the teaching, but also the man whom she is deceiving ("the woman" and "the man" of v. 12).
(d). The verb "continue" is in the aorist active subjunctive. This verb's tense confirms that the instructions Paul gives in vs. 11-15 are designed for the woman and the man in question (v. 12), to two people who are alive at the time Paul is writing and not to those who are either dead or not yet born (i.e. Eve or women in general).

(2). The woman in question was teaching error out of her ignorance and should be shown mercy.

Mercy and love toward false teachers is one of the themes of letter we call I Timothy, particularly because the assembly at Ephesus was a church filled with people from pagan backgrounds: "As I urged you upon my departure for Macedonia, remain on at Ephesus so that you may instruct certain men not to teach strange doctrines, nor to pay attention to myths and endless genealogies, which give rise to mere speculation rather than furthering the administration of God which is by faith. But the goal of our instruction is love from a pure heart and a good conscience and a sincere faith" (I Timothy 1:3-5).

Paul has already spoken of the ignorance he was in before he was taught the truth: "(I) was a blasphemer, and a persecutor, and insolent; but I received mercy, because being ignorant I did it in unbelief" (I Timothy 1:13).

Paul mentions how Eve sinned in ignorance: "...it was the woman (Eve) who was deceived and became a sinner" (I Timothy 2:13). The entire first two chapters of I Timothy are leading up to Paul expressing sympathy toward, and encouraging Timothy to display love to, that woman teaching error. We know that Paul wrote this letter in response to problems Timothy was facing in Ephesus, and those problems were known by Paul (I Timothy 3:14-15). This is a personal letter, not a general epistle, and proper interpretation requires the reader to delve into why Paul wrote the letter in the first place.

(3).  Paul expressed hope that this woman will be saved by Christ, even though she is in error.

Verse 15 "she will be saved through (the) childbearing" is a reference to the the woman's salvation through the Incarnation of Christ (the childbearing). The word teknogonia is used just once in Scripture and the word is NOT a verb (childbearing)--it is a noun (THE childbearing). This is a reference to the Messiah, who was born from a woman despite the deception of Eve. The Messiah came to destroy the destroyer, to crush the head of the Serpent who deceives, and the deceived woman of I Timothy 2 will be saved through "the childbearing" if stops teaching heresy, learns of Christ in complete submissiveness (v. 11), and continues in "faith, love, and holiness in propriety."

A similar passage to I Timothy 2:11-15 is Revelation 2:20: "But I have this against you, that you tolerate the woman Jezebel, who calls herself a prophetess, and she teaches and leads My bond-servants astray so that they commit acts of immorality and eat things sacrificed to idols."

The problem with Jezebel was not that she "teaches and leads." The problem with Jezebel was that she taught and led others "astray." The only solution for a woman who teaches and leads astray is for her to first learn the truth. This is precisely the solution Paul proposes to Timothy for the woman of I Timothy 2. She must first learn "in quietness and full submission" (v.11). By the way, this is also a good practice for any man who is teaching error. He should be confronted and told to FIRST learn in quietness and submission before he attempts to teach.

(5).  The people who misinterpret Paul and attempt to prohibit women from teaching or leading men are ignoring the entire tenor and teaching of the New Testament.

God empowers His people through giftings and anoints His people to fulfill their calling through the Holy Spirit. The giftings of God are never distributed according to gender. The calling of God is never limited according to physiology. When the daughters of Philip prophecied, it was by the giftings of God and the anointing of the Spirit. When Anna taught the men in the Temple it was in fulfillment of the calling of God on her life and through the giftings and anointing of the Spirit. From Priscilla, to Lydia, to Junia, to Phoebe, and to all the rest of the New Testament women God used to expand His kingdom through prophesying, teaching and leading other men and women, God has gifted and anointed as many women as He has men.